Understanding the Effects of Growing Seasons, Genotypes, and Their Interactions on the Anthesis Date of Wheat Sown in North China 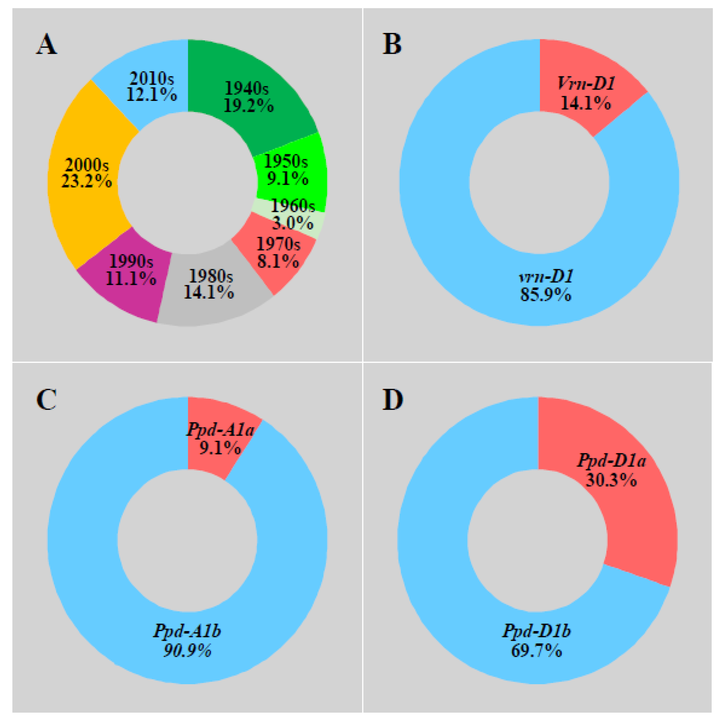 Quantitative studies on the effects of growing season, genotype (including photoperiod genes and vernalization genes), and their interaction (GGI) on the anthesis date of winter wheat (Triticum aestivum L.) are helpful to provide a scientific reference for selecting or developing adaptive varieties in target environments. In this study, we collected 100 winter wheat varieties with ecological adaptability in North China and identified the anthesis date under field conditions for three consecutive years from 2016 to 2019 with mapped photoperiod and vernalization alleles. Our results showed that the number of the photoperiod-insensitive Ppd-D1a allele increased with variety replacement, while the haplotype Ppd-A1b + Ppd-D1b + vrn-D1 (A4B2) decreased from the 1940s to 2000s. The anthesis date of A4B2 was significantly delayed due to the photoperiod-insensitive alleles Ppd-A1b and Ppd-D1b. The additive main effect and multiplicative interaction (AMMI) model and GGI biplot analysis were used for data analysis. A large portion of the total variation was explained by growing seasons (66.3%), while genotypes and GGIs explained 21.9% and 10.1% of the anthesis dates, respectively. The varieties from the 1940s and before had a great influence on the anthesis date, suggesting these germplasms tend to avoid premature anthesis and could facilitate the development of phenological resilient varieties.

a research scientist of digital agriculture at the CSIRO.